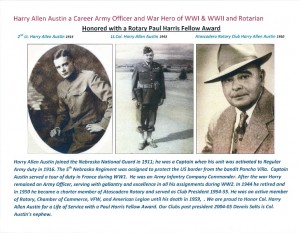 Harry Allen Austin joined the Nebraska National Guard in 1911; he was a Captain when his unit was activated to Regular Army duty in 1916. The 5th Nebraska Regiment was assigned to protect the US border from the bandit Pancho Villa. Captain Austin served a tour of duty in France during WW. He was an Army Infantry Company Commander. After the war Harry remained an Army Officer, serving with gallantry and excellence in all his assignments. In 1944 he retired and joined Rotary in Atascadero California where he served the community for many years, in Rotary, Chamber of Commerce, and American Legion. We are proud to Honor Col. Harry Allen Austin for a Life of Service with a Paul Harris Fellow Award.