Cowboys and Rotarians having fun 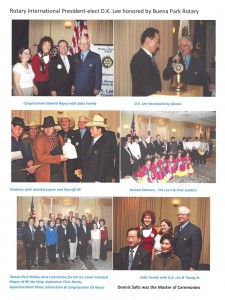 After the outlaws were “rounded up” and held for Reward money in came Sheriff  DK Lee from Evanston, Illinois, who used a big bag of gold to pay their bounties. It was great fun for everyone as Rotary International President-elect DK Lee became Sheriff DK for the evening!

The occasion was a Special Dinner to Honor DK Lee and his wife Young Ja.  The multi- club event was hosted by Buena Park, Garden Grove and Westminster Global City Rotary Clubs. There were 150 people in attendance from 25 different Rotary Clubs.

Awards and recognitions were given out by Clubs Presidents. Congressman Ed Royce was honored for his years of service both at home and internationally, and he became an Honorary Member of Buena Park Rotary. The Certificate was presented by D. K. Lee and Club President Shailesh Shah gave Ed  his Rotary Pin.

A team of twelve Korean Club members danced and sang for D.K. Lee & his wife Young. The students were from Buena Park High School. The traditional costumes included colorful fans for the fan dance. AP Dr. Greg Buckner is a sponsor for the students.