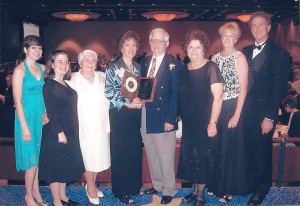 Dennis is very active throughout the Buena Park community. He is member of Rotary International. This year he is Director of Youth Programs for Rotary District 5320, which includes all of Orange County and the southern part of Los Angeles County. Dennis shows his passion for service as he coordinates high school and college service clubs, speech contests, singing contests, and international youth exchanges.

Dennis is past Club President, served on the District Governor Selection Committee for two years and was assistant governor for two years. He is a multiple Paul Harris Fellow and a Paul Harris Society member. Also, he has been instrumental in the founding of both Interact and Rotaract Clubs for high school and college students, respectively, and he has sponsored 14 new Rotary members. He mentors new Rotarians and Inspires people both young and old to get involved in community service.

Dennis and Christiane, have two daughters named Carrie and Tracy, who are both seniors at California State University, Fullerton. The Dennis Salts family are long-time sponsors of the Buena Park Library, Library Guild members and participants in both the Reading by 9 and Summer Reading Programs.

A longtime volunteer with both the Boy Scouts and Girl Scouts, Dennis has also played Santa Claus for the Buena Park Needy Children’s Shopping Spree. He was Principal for the Day at Los Coyotes School in 2002 and a judge for the “Kids-with-Heart” program at Buena Park Downtown. He is a member of Christ Community Church, Buena Park Historical Society, California State University, Fullerton, Alumni Assn., Fullerton Arboretum, among other groups.

In 2005, he was named a “Friend of Education” by Anaheim Union High School District; and in 2007 he received three honors: the “Dignity of Service Award” by Buena Park Soroptimists and the “International Cliff Dochterman Award” for Distinguished Service to Scouting, he was named Interact Advisor of the Year for 2007 by the Orange County Boys Scout Council

While Dennis has received numerous awards for his dedication to youth, for him it’s not about the honor. Instead, he says, “To me it’s all about the future.”