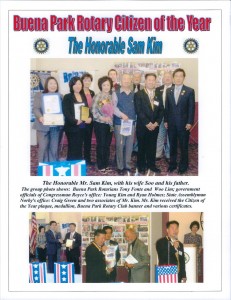 The Honorable Sam Kim is Buena Park Rotary’s Citizen of the Year 2010. Mr Kim is a Local Businessman and International Volenteer. Sam Kim was honored at a Luncheon held at Mrs. Knott’s on May 26th. Family and Friends joined Rotarians and Government Repersentaives at the annual event……………………………… Sam Kim was selected to be Buena Park Rotary’s Citizen of the Year 2010. He is a highly respected local businessman.
Mr. Kim was born in South Korea and immigrated to the United States in 1972 at the age of seven. His family moved to Fullerton in 1978, where he attended Parks Junior High and Sunny Hills High School. In 2001, Sam moved his law and real estate practice to Buena Park, where he currently is President of Sam Kim and Associates, APC, and principal for Century 21 Sunny Hills, Buena Park office.
Sam serves as Executive Director for the Korean Church Coalition for North Korea Freedom, which is a NGO dedicated to ending the atrocities suffered by the people of North Korea, and is on the community advisory council for Trinity Law School. Each summer, Sam serves as a mentor to student interns in the area of Human Rights and Law. He has worked with numerous Congressmen and Senators on legislation affecting North Korea human rights, and currently serves as a Steering Committee Member on the Asian Pacific Community Advisory Council for Congressman Edward Royce. In recognition of his faithful commitment of pro bono legal services, he was inducted as an Honor Guard member for the Alliance Defense Fund and also serves as an affiliate attorney for the Pacific Justice Institute.
Mr. Kim and his wife Soo have been married for 20 years, and their son Kevin, who is 16, attends Fairmont Academy.