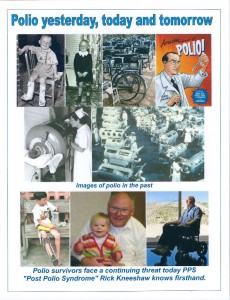 Polio Survivor to speak about PPS

Rick Kneeshaw, Polio Survivor, will speak at Buena Park Rotary Club on October 20th. The event will be held at Knott’s Berry Farm in Mrs. Knott’s Chicken Dinner Restaurant. The luncheon is open to the public and costs $13.50.
Rotarian Magazine for September 2010 has an article on Post Polio Syndrome starting on page 30. Mr. Kneeshaw is an expert on PPS. Rotary’s “Polio Plus” efforts have nearly eradicated this dreaded disease worldwide. Now it is becoming painfully apparent that Post Polio Syndrome is going to affect millions of people who survived the virus. Below is a short history of Rick Kneeshaw.
Rick Kneeshaw, of Scripps Ranch, suffered from polio as a child. Now he is battling post-polio syndrome, a disease that can strike former polio victims decades after they have recovered from the initial disease.

He contracted polio when he was 3 years old in 1951. His left leg and hip, and parts of his back, were totally paralyzed. His right leg was also affected, but not as severely.

From then until he was 16 years old, he spent a total of four and one half years in Shriner’s hospital. He had 12 operations while there. He had tendons loosened, joints fused, muscles transplanted, and the growth in his good leg stunted. He was eventually able to walk short distances brace free. For speed or distance he used two forearm crutches.

In 1953, he became a Polio Poster Child. While he was the poster child, he met many movie stars and famous people. He still remembers meeting Roy Rogers and Dale Evans. He also discovered that he enjoyed public speaking. Later in life, he was able to successfully utilize this skill in his professional career.

Following graduate school, he taught high school geometry, trigonometry, and statistics before being forced to retire because of Post Polo Syndrome. His right (good) leg just got too weak. Rick said “Teaching high school was fun, but was a lot more work than I imagined.”

Now he spends a considerable amount of time doing volunteer work. In the past, it was volunteering at schools, but now his volunteer work revolves around polio and PPS issues.
It’s estimated that up to 600,000 Americans living today once had polio. Many are like Kneeshaw, “polio survivors” who labored to rebound from the disease. With treatments and hard work, their bodies overcame at least some of the effects of polio.