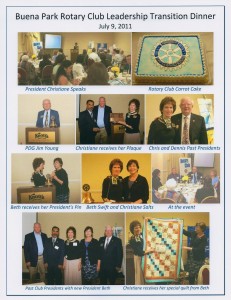 The Invocation was offered by Greg Swift, Pledge by Shailesh Shah, Four-Way-Test by Virginia Vaughn and the Song by Baron Night. Dr. Swift and Christiane Salts introduced Rotary members, relatives and friends in attendance. PDG Jim Young and PDG Lane Calvert made opening remarks. During the event, President Christiane Salts reported on her year achievements with slide show. During her year Buena Park Rotary earned the Honor of being a Distinguished Rotary Club by the International President. Next, Club President Salts mentioned several goals which had been reached over the course of this year. One highlight was World Polio Day in October, when the Buena Park City Council members attended a special event and issued a proclamation in recognition of Rotary’s fight to eradicate Polio. Our club strengthened our ties to the Buena Park community, via connections with the Buena Park City Council, Woman’s Club, Library, Police Department, Knott’s, and both Buena Park and Savanna High Schools. In the community, our club has promoted literacy and knowledge of the Rotary Four-Way-Test, by donating Andy & Elmer Apple Dumpling Adventure books to local schools in honor of our speakers. The club enjoyed having two family-oriented club parties at member homes this year, one at Woo and Mina Lim‘s residence in the fall and another at Shailesh and Swati Shah’s house at the start of the New Year.

Outgoing President Christiane Salts was presented a plaque in her honor by Dr. George West and Shailesh Shah, after which Dennis Salts presented her with a Past President’s pin. Dr. Elizabeth Swift received her President’s Pin from outgoing President Chris Salts. Dr. Swift spoke about her goals as Incoming President. Using a number exercise, Dr. Swift conducted a short participatory exercise which made the point that we are all individuals in the way we view things, but can work together to arrive at solutions. At the end of the evening, gifts were presented to special attendees. The grand finale was when President Swift presented a quilt she made using 28 squares submitted by Rotary members to Christiane.

Buena Park Rotary meets at Mrs. Knott’s Chicken Dinner Restaurant on Wednesdays at 12:00.
Visitors are welcome to attend and see what Rotary does in the community and around the world. BPRotary.Org