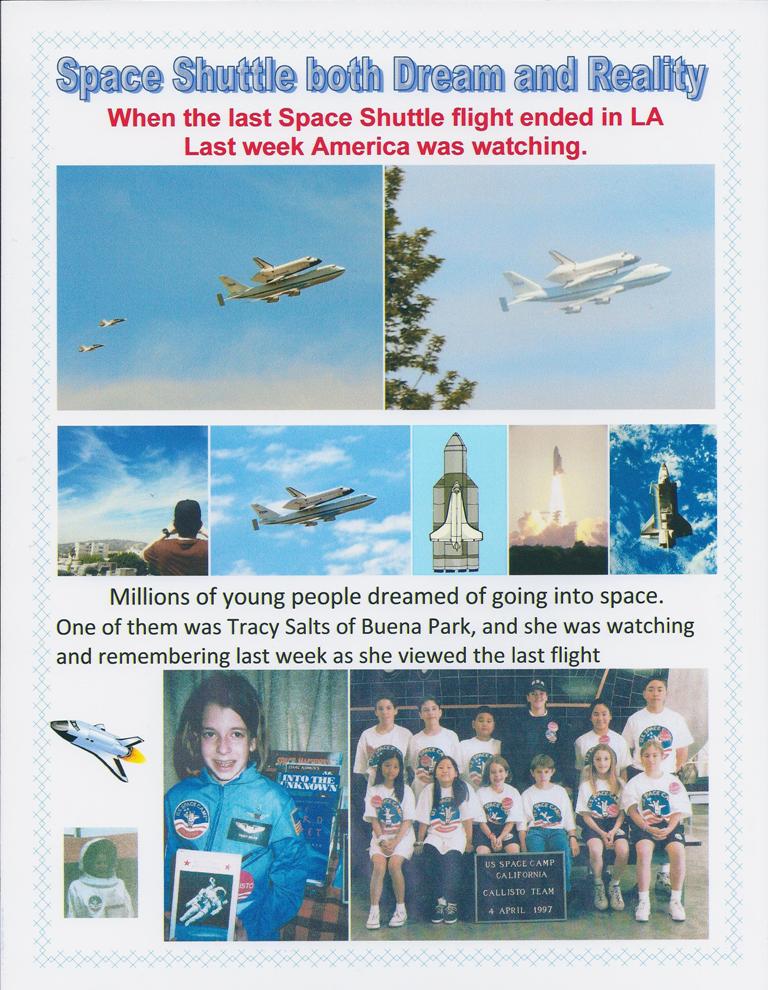 When the last Space Shuttle flight ended in LA, America was watching.

Millions of young people dreamed of going into space.

One of them was Tracy Salts of Buena Park, and she was watching and remembering as she viewed the last flight.

Tracy went to Space Camp at Moffett Field, CA, in 1997 while attending 5th grade at Dysinger Elementary School in the Centralia School District. For a week, Tracy and the other young astronauts lived in “habitats” of the camp, and learned about NASA’s space programs, rode in shuttle and mission control simulators and learned how weightlessness feels. She had the chance to take the role of being a Ground Control Officer and also a Mission Specialist, during which time she had to do some chemistry experiments. Prior to this experience, Tracy had saved money for two years, but it was worth it ~ she graduated and got her U.S. Space Camp wings!

Christiane was among the 11,000 people in the nation who applied to NASA to become the civilian member of the 1986 “Challenger” shuttle mission, which exploded in the air shortly after takeoff, killing all seven astronauts on board, including teacher Christa McAuliffe. Tracy wasn’t deterred by the many risks of being sent into space, though, until later when her asthma caused her extreme difficulties on air flights taken during various family trips.

Tracy’s interest in space was in part propelled by meeting Sally Ride about two years earlier at a book-signing for her “Third Planet” book. Tracy was looking forward to following in the footsteps of this first woman in history to become an astronaut.